A declaration game had been agreed in advance for fixture and, after winning the toss, a plucky Hogs O40s team took to the field under blazing sunshine – and duly toiled.

Opening bowlers Chris Hill and Dick Aldridge bowled superbly without due reward, despite many a valid LBW shout. First-change Will Darlow caused real problems, again without recompense. Mark Dryden-Brownlee gamely pushed his tweakers through, Guy Ashton tossed them up bravely and Richard Talbot steamed in…all to no avail.

With the Cricket Society on 140-odd without loss, and their No 1 steadily amassing a patient century, the situation was looking ominous.

Nevertheless, spirits and standards remained high in the field and two bowlers managed to stem the tide to give the Hogs a fighting chance. Jeremy Currie’s beguiling flight and Charles Taverner’s pace and bounce saw the former pick up three well deserved wickets – one to a stunning diving catch by Chris Hill – and the latter remove their centurion clean bowled.

The declaration was a fair one – 248 to chase. But only after a magnificent match tea courtesy of Susie Barrie, majoring on cake and lashings of fine wine.

Openers Chris Hill and Mark Dryden-Brownlee absorbed the early pressure while doling out some notably crisp hitting. An opening partnership of 64 provided an excellent platform for the chase – a task which No 3 James Kendall undertook with relish and style, as ever.

Kendall’s 67 and Dryden-Brownlee’s fine 80 took the fight to the opposition. Nevertheless, with 10 overs to go, the run rate was hovering around 7 an over – and the wily bowling was proving hard to get away.

A couple of quick wickets saw skipper Peter Richards take to the field and duly execute some truly embarrassing attempts at reverse sweeps. Realising his strengths lay elsewhere, he started playing some proper cricket shots and, together with Kendall, Taverner and Talbot, the latter of whom was outstanding in his running between the wickets, slowly whittled the target down until the winning runs were hit off the penultimate over.

The players left the field into the lengthening shadows of a perfect summer’s evening. Many glasses were duly raised on both sides. This was a wonderful win for the Hogs, a fine game played in the proper spirit, enjoyed by all players and spectators alike.

Sincere thanks are due to bar manager Bill, scorer Richard and umpire Mal. Thanks also to the spectators for their support, Emma Talbot-Williams for match manager support, and the groundsman for an excellent wicket. 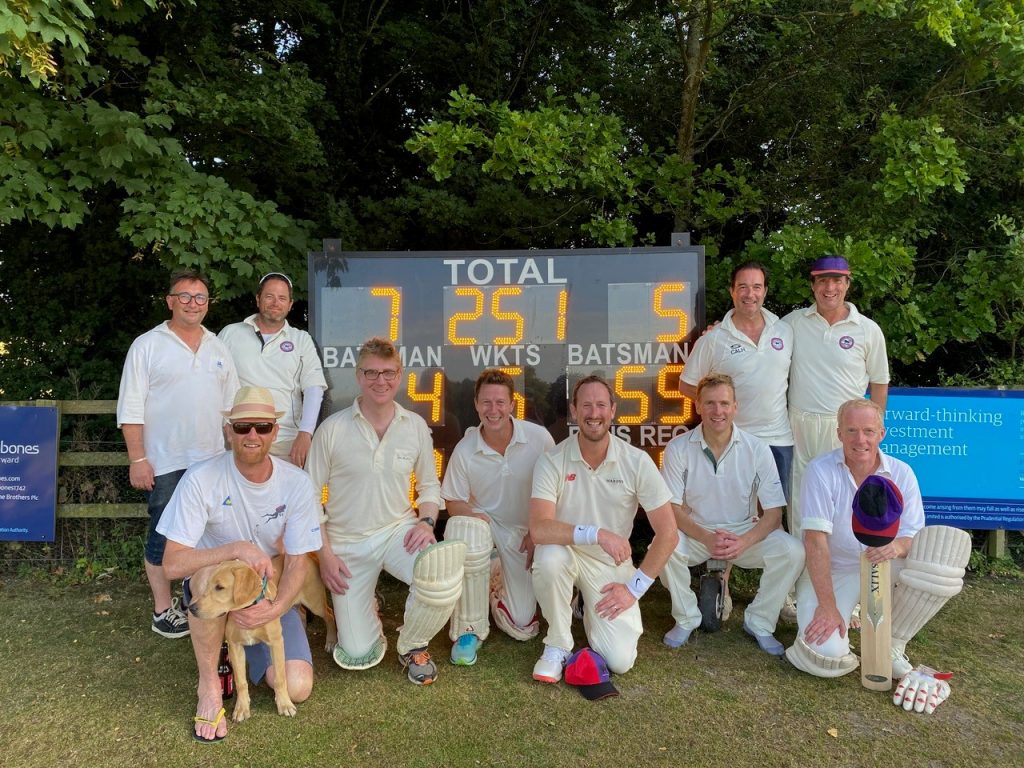