Radley won the toss and elected to bat on a lovely day at Warnford. A rapid start to the game saw the Radley openers put on 80 in little over an hour before John Dennis got the break through so badly needed after drinks. This was the first of 2 wickets for John either side of lunch that brought some control back for the Hogs. Then, on 97, Mungo Fawcett, who had been driving imperiously, got called for a quick single only to be run out by Henry Wakefield. Seconds later another run out from Henry put Radley back to 198-5. Thereafter the appetite for singles dried up as Ed Lyle struct a rapid fire 36, twice depositing the author over the pavilion in a brutal knock. Louis Hanson brought the carnage to an end with two wickets in his opening over on his first senior outing at Warnford. Chasing 254 the Hogs started well enough but disciplined and skillful bowling from the Radley attack soon reduced the Hogs to 61-8  before Paul Struthers and John Dennis offered some support to Henry Wakefield (39) who looked untroubled before being the last to fall with the score on 116. A disappointing collapse in the face of some excellent bowling. 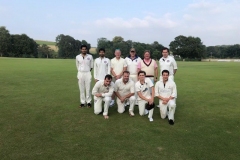