The grass green and the sun shining, the Hogs arrived at the Hurlingham Club with a sense of freedom in the air. The Hogs won the toss and elected to field and when Hugo Freeman bowled the ball of the century, the ball drifting away and then jagging back sharply to clip the top of off, the decision looked a good one. After 5 dropped catches and a couple hundred more runs it was looking less of a good call. The Hurlingham ended up declaring on 304-2 with Henry Wakefield picking up the second wicket. Catching practice required!

The Hogs made a steady start with the bat, Sam Aldridge and Freddie Fraser both seeing off the new ball and making contributions before being dismissed. 1 brings 2 in cricket and in this case it brought 3, 4 and 5 and all of a sudden the Hogs found themselves 55 for 5, bringing to the crease father and son, Nick and Ben Fraser. All was not lost it seemed as the pair put on a 123 run partnership in good time but with the run rate ever increasing both were dismissed in quick succession. The tail didn’t wag and the Hogs were all out for 231.

A wonderful day despite losing by 75 runs. 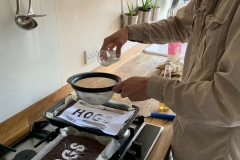 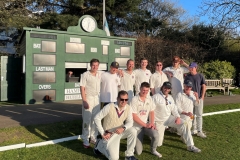