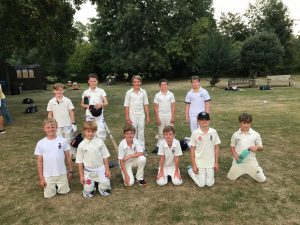 On a hot humid Monday afternoon The Hoggetts u11s travelled to St Cross for a 20 over a team evening match. Ben Stearn kindly offered to captain for the evening.  With a mixed aged team of players from 11 to 7, many of whom had never met before.  We won the toss and elected to bowl, we started strongly with St Cross only scoring 24 for the loss of 2 off of the first 6 overs.  Tight bowling in the first few overs from Rory Butler and Alex Cordrey.

The middle section of their innings saw an increase in the run rate, with the exception from some very tight bowling from our youngest player Issac who was steady and straight for his two overs.

St Cross carried to pile on the runs and finished up on respectable 119 for 6.

After a quick turn around Hoggetts made a good solid start and after 5 overs we were well ahead of the rate, some excellent aggressive batting from James and John, John finally falling for 23 and James retiring at the required 25.

We then had a little wobble loosing 2 quick wickets, but captain Ben and Henry Sadler steadied the ship and we reached our target with an over to spare.  A very impressive victory considering many of the boys lack of game time, and never having played as a team before.

No man of the match as really an excellent all round team performance.