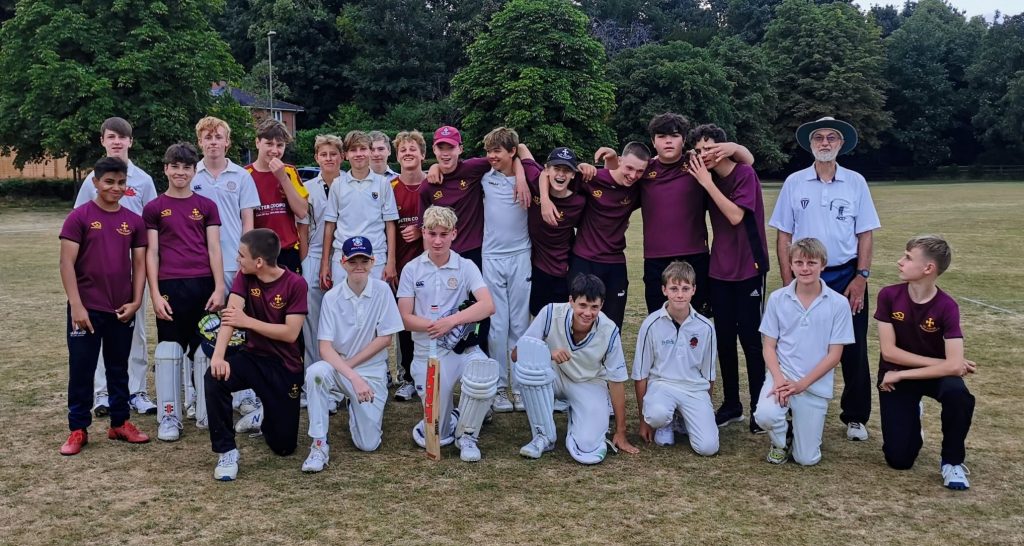 Probably a candidate for the Guinness Book of Records, for the first time in known cricket history a team deployed four leg spinners in a T 20 contest.

On a spicy pitch with good bounce and a lightening fast outfield Hogs took the field against a strong St Cross team.    For many of the Hogs players this was the first time that they had played together.   Notwithstanding this they soon gelled together with some fielding drills and a run through the batting and bowling order aimed to give everyone a game.  Edward Purser took on the Captaincy to manage the field settings with his bowlers.  Willian Gaunt took the keeping gloves (making an excellent effort as he dusted off his keeping cobwebs).

St Cross won the toss and elected to bat.

A quick discussion with the team and Hogs decided to start with pace to utilise the new ball and bounce of the pitch. It was during this discussion that we realised we had a quad of leg spinners – also licking their lips at the prospect of bowling with the extra bounce and large boundaries.

Opening pacers James Kennedy and Zam Spurrier bowled with real threat getting good lift off the pitch, creating consistent bounce but not a great deal of lateral movement off the pitch.   The St Cross openers played carefully, but missed shot edges flew to the boundary.  The pace of the outfield meant that once the ball beat a fielder then it was a boundary.   St Cross steadily accumulated runs.  After the openers had each bowled two overs the first change of Ben Hardman came on with some probing medium pace.  Ben  got some good swing through the air and caused a few plays and misses.

Then to the Quad – Hogs’ leg spinner, Dom Hardie, making his Hogs cap took the ball.  Using his height Dom extracted good bounce from the pitch and had the batsman in two minds.  They decided to attack.  What ensued was a classic two overs of cat and mouse between the batsman and spinner with boundaries flowing but answered with the tinkle of the bails being dislodged by an arm ball in between bat and pad.   Hogs first wicket.

Ollie Livingston Booth and James Zawoda came on to dry up the runs – both bowling economically with excellent lines.   Ollie only going for 9 runs off his two overs.

After Ollie and James had continued to reduce the St Cross run rate, Hogs took more pace off the ball and brought on a dual leg spin attack of Edward Purser and William Chipchase.   Edward mixing his pace and flight to create chances and William bowling with zip and revolutions to keep the batman in their creases.   The leg spinners four overs going for a miserly 19 runs, with a stumping chance and a few catches just being out of reach.

The last four overs were closed out by Hogs’ fourth member of the leg spin quad, Rollo Collett – who collected the wicket of Isaac caught off the last ball of the innings and James Kennedy returning to finish his four overs with good pace and menace.

An excellent effort by the Hogs with the ball and in the field – good backing up and athletic ground fielding to keep St Cross to 157 off their 20 overs.   Still a good score by St Cross, but not unbeatable.

Unlike Hogs, St Cross bowled both of their two opening bowlers straight through the first 8 overs, bowling with threating pace and bounce.   Harry and James played sensibly – hitting the bad balls playing some beautiful drives and cuts while rotating the strike to keep the score board ticking.    St Cross bowled well.

With the first eight overs having been navigated without loss, Hogs were 52 off eight overs and about to face the St Cross change bowlers.   The next four overs were bowled tightly and James and Harry had little boundary opportunities.  They kept the singles flowing.  Harry started to accelerate with two cover drives off Stanley, but ran out of luck when bowled by Jacob for well constructed 17 runs with Hogs being at 84 runs for one off 12 overs.

Enter Rollo Collett to keep Hogs in sight of the run rate with James.   At that point Hogs needed 9.25 an over.    The St Cross change bowlers kept the pressure on and after 15 overs James retired having made a fine 36. Hogs needed just over 11 an over off the last 5.   Enter Ollie Livingston Booth (“I am bowler who rarely gets a chance to bat at school”).   Over the next 5 overs Ollie hit an unbeaten 36 runs and with 9 needed off the last 6 balls, Rollo and Ollie needed just half of them to take Hogs to 160 for 1 and victory.

What an exciting and well managed run chase and played in great spirit.  Only a few Hogs got to bat, but all contributed in a great team effort.